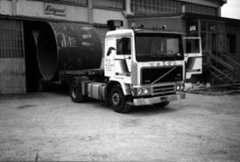 End of June '74, Mr. Giovanni Fulgosi, just came back from Belgium, where he was "collier", decided to take a chance of an his own job so he built his first shed with his own hands, and he started with the manufacturing of mechanical constructions for the local cement industry. Five years later, in this area, the market's request was focusing on products for petrochemical industry, here the decision to improve the company under this particular point of view, so, in few months, Fulgosi Giovanni S.n.c has been the first company in North West Italy equipped with a "Plate bending rolls machine" able to produce tubes up to 65 mm. thickness. This choice has been more than ninety percent of the power needed to reach our actual force, which include all major guidelines that Mr. Giovanni Fulgosi left us before his dead in January 1981.

Based on the experience grown up on the field, Fulgosi Giovanni S.n.c. is today a worldwide leader in manufacturing of welded carbon and low alloy steel products. The production range is in continuous evolution due to the new market's demand and we're doing our maximum effort for not to forget our origins and the inestimable value of our history.

In the beginning there was "the tube"..., even if it seem the very first sentence of a book, in fact it mean exactly the growing process of the Company: from that tube we learnt, not without mistakes, how to produce highly sophisticated products i.e. the 28" x 28" split tees with the dimension's tolerance of 2mm., flanged with a L.O.R., welded with procedures tested at -60 degrees Celsius, low Carbon Equivalent content for better field operations, hydraulic tested and inside machined for the backing strips. Today we weld also Titanium material, but this is another story...